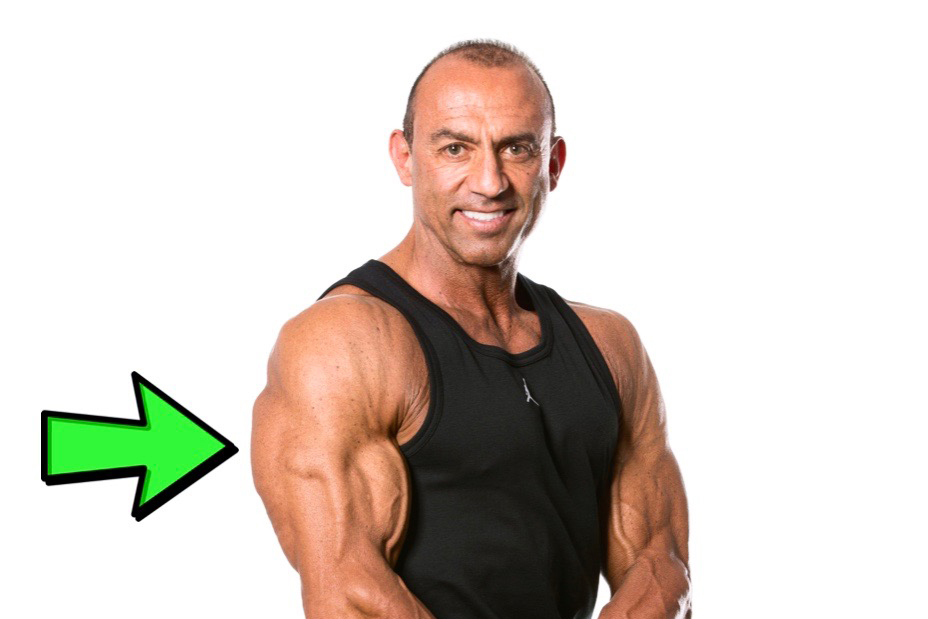 Review of Questionable Conclusions
of Scientific Studies (a series)

A study was recently done which attempted to compare the resultant muscle growth of two different triceps exercises. The two exercises that were compared were the “Overhead Cable Triceps Extension”…and the standard “Cable Triceps Pushdown”.

The 21 participants did one of the exercises with their left arm, and the other exercise with their right arm — for a 12 week period of time. Then the triceps growth of each arm was measured. The conclusion of the researchers was:

This study — and the conclusion of the researchers — was reported in “PubMed.gov” (National Library of Medicine), among other journals.

This conclusion was then widely reported in a variety of fitness journals, touted by numerous “evidence-based” personal trainers, and announced as fact by professors of exercise physiology…throughout the world.

“Insider.com” published a report on this study, with the following headline:

“Stop doing triceps pushdowns if you want bigger arms…overhead extensions may lead to significantly more muscle growth, according to a study published July 12, 2022 in the European Journal of Sport Science”.

However, I believe there is a flaw in this conclusion, and it stems from the assumption that the only difference between the two exercises was the position of the arm, relative to the shoulder joint.

Actually, that was not the only difference between the two exercises. It was not even the primary difference, although it might appear that way to most people.

The resistance curve of each exercise was not even addressed, so it appears to have not been considered.

In order to accurately assess the value of a “resistance exercise”, a researcher must have a thorough understanding of the mechanics that occur outside the body (i.e., the physics of each exercise), and ensure that both exercises being compared have the exact same resistance curve — thus eliminating all possible confounding variables.

To see how this oversight occurred —let’s begin by reviewing the triceps anatomy.

The triceps muscle is compromised of 3 parts. These are known as the “long head” (Longus), the “lateral head” and the “medial head” (Medius) — shown below.

The “long head” originates on the outer edge of the shoulder blade (the “scapula”…indicate by the black arrow). The other two parts — the “lateral head” and the “medial head” — originate on the upper arm bone (the “humerus”)…indicated by the green arrow. Then, all three parts converge on one single tendon just above the elbow joint. This tendon then crosses the elbow joint, so — when the triceps contracts — it “extends” (straightens) the elbow.

Since the origin of the “long head” is situated lower than the shoulder joint, positioning the arm overhead causes the distance between the origin and insertion of the “long head” to be farther away from each other, as compared with having the arm down at one’s side. This creates a situation whereby — potentially — the “long head” could be stretched more during an overhead riceps exercise. However, this requires that the elbows be fully bent, while the arms are overhead.

It is well known among students of exercise physiology that allowing a muscle to stretch more during a resistance exercise increases the potential benefit of the exercise. Thus, it’s conceivable that performing Overhead Triceps extensions COULD cause greater development of the “long head” of the triceps — but only the “long head”…not the other 2 parts.

This mystified the researchers because they know that the “lateral” and the “medial heads” of the triceps do not change their length, nor their function, when the position of the arm (humerus / shoulder joint) changes. Therefore, there is no logical reason why those two parts of the triceps would benefit more from an overhead triceps exercise, as compared with an “arms down” triceps exercise.

Yet, apparently none of the researchers stated, “…the fact that the lateral and medial triceps heads improved more with the overhead exercise suggests that some OTHER reason probably caused the better triceps growth….maybe the better outcome was NOT due to the Overhead arm position.”

The two uni-articulate triceps heads (the lateral and medial heads) cannot possibly function differently during an overhead triceps exercise, because their length is not altered — in fact, nothing about their function is altered — by a change in the shoulder angle. So this was a clue that something ELSE caused the triceps to grow better with the overhead triceps exercise.

In order for the conclusion of a study to be accurate, the researchers must be aware of how and when OUTSIDE forces (ground reaction force, centrifugal force, centripetal force, friction force, composite force, momentum, varying DIRECTIONS of resistance and variations in “moment arms”) are occurring. It seems this was overlooked in this study.

All levers (which includes human limbs…arms, legs, etc.) follow universal physics principles that influence how much “load” is placed on a particular structure. Longer levers magnify load more than shorter levers, and levers that are more perpendicular with resistance (e.g., gravity) magnify load more than levers that are more parallel with resistance.

In the two RIGHT images (upper and lower), the forearm is horizontal (perpendicular with gravity). At both of those points in the range of motion, the triceps experiences the maximum percentage of available resistance (which is a factor of the amount being lifted).

Being able to recognize when an exercise provides a good resistance curve requires some familiarity with physics principles (mechanics), and this awareness is significantly different than issues related to physiology.

In the image below, I’ve drawn a red line through my forearm (i.e., the limb that is being moved by my triceps), and green line though the cable (i.e., the direction of resistance being provided by THIS particular exercise).

It is not the “neutral arm” position of a standard Cable Pushdown that compromises this exercise. It is the fact that the direction of resistance is not perpendicular with the forearm, at the beginning of the range of motion. It can be improved, however. If you were to change the direction of resistance (i.e., change the position from where the resistance comes), you can make it “early phase loaded”. This would then provide an optimally productive resistance curve, making this an excellent triceps exercise. In the images below, I show how you would do this, even though the arm motion stays the same. Make the resistance come from slightly behind you, rather than from in front of you.

Below is another way of doing this, with the added advantage of having “back support” (and a seat) for more stability.

The other exercise that was used in the study is depicted below — a (one arm) Overhead Cable Triceps Extension.

Acknowledging when the direction of resistance is perpendicular to a limb — versus parallel to a limb — is critically important, because only then can the “resistance curve” of the exercise be identified. Only then can it be determined whether it matches the strength curve of the target muscle. Only then can a comparison between two exercises be accurate.

The conclusion reached by these researchers — that “Overhead Triceps Exercise are more productive than Neutral Arm Triceps Exercises” — ignores the significant difference in resistance curves, between the two exercises.

I believe it’s entirely unreasonable to suggest that overhead triceps exercises are “significantly better” for triceps growth, compared to neutral arm triceps exercises, which was the conclusion of this study.

The lateral and medial heads of the triceps are not the least bit altered in their function, based on the position of the arm / shoulder. Therefore, it should be clear that these two parts of the triceps CAN be optimally developed with any triceps exercise (any arm / shoulder position) provided an optimal resistance curve is used (early phase loaded / perpendicular resistance at the beginning of the range of motion).

There are two ways of answering this question.

The first way is “Try it and see”, which is a very reasonable strategy. Why would you do an uncomfortable exercise (i.e., an overhead triceps exercise) if a neutral arm triceps exercise (with an optimal resistance curve and maximum elbow bend) works just as well? I am thoroughly convinced it does work “just as well”, and I have proven it with the excellent results I’ve achieved. The thought that “I cannot achieve optimal triceps long head development UNLESS I perform an overhead triceps exercise” seems absolutely ridiculous to me.

The second way of sensing whether it’s “necessary” to do an overhead triceps exercise in order to achieve optimum development of the triceps long head, is by comparing it to the quadriceps. The triceps of the arm, and the quadriceps of the leg, are essentially the same type of mechanism.

The long head of the triceps and the rectus femoris (of the quadriceps) are the only bi-articulate parts of the triceps and quadriceps (respectively) . The other parts of each muscle only cross the one joint. The suggestion that training the triceps with maximum shoulder extension (overhead position) is “essential”, is like suggesting that maximum hip extension is “essential” when working the quadriceps (i.e., to fully stretch the rectus femoris). In both cases — I believe — it’s absurd.

The two triceps exercises I most recommend (the only ones I do…one or the other, but not both, per workout) are “Modified Cable Pushdowns” (using two cables, coming from behind you), and “Decline Dumbbell Triceps Extensions”…both shown below. Both have an optimal resistance curve.

You might want to read “The 16 Factors That Determine Exercise Value”, at my website: dougbrignole.com …in order to see all the factors that can be used to determine the value of an exercise.

I have deliberately avoided overhead triceps exercise for the past 20 years, and — as you can see below — my triceps development has not been the least bit compromised (not even the “long head”). In addition, the numerous clients I have coached, as well as those who have followed the recommendations in my book, have also reported exceptional triceps development doing only one of the two options shown above.

The conclusion reached by the researchers who conducted this study…

…is misguided and misleading.

The outcome of this study would have been very different if the “arms down” triceps exercise used in the study had had an optimally productive resistance curve (i.e., a perpendicular direction of resistance at the “early phase” of the range of motion), instead of the compromised resistance curve which is typical of a standard Cable Pushdown.

This is not meant to suggest that Overhead Triceps Exercises are “not productive”. They can be productive, but are not superior to “neutral arm” triceps exercises when they are early phase loaded.

Doug Brignole is a veteran competitive bodybuilder with over 43 years of experience. He is a former Mr. America and twice Mr. Universe winner, and a respected author. He is still competing successfully at the age of 62 — without injury.