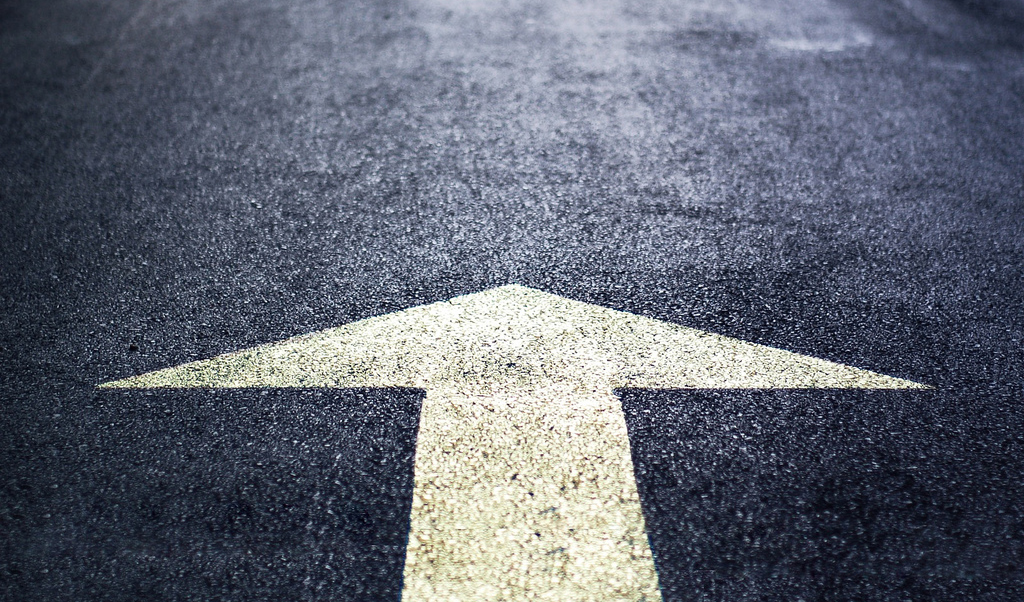 Let’s say you (at a bodyweight of 200 pounds) are about to perform a Barbell Squat. You are in the standing position, with a 200 pound barbell on your shoulders. You are therefore pressing straight downward, against the ground, with 400 pounds. If you were to put a scale under your feet, this would be confirmed.

In physics, the “ground reaction force” rule stipulates that an immovable brace (i.e., the ground, or the starting blocks of a sprinter, etc.) “pushes back” an amount equal to the amount pressing against it, and in the exact opposite direction. This means that the straight downward (vertical) pressing of your bodyweight plus the barbell, during Barbell Squats, is producing a straight upward (vertical) direction of resistance.

In the figure above-right, you can see what would occur if you intentionally emphasized knee extension–instead of hip extension–thereby fully activating your quadriceps. Maybe you’d like to try this as a test (just kidding). If you do, be sure you have a soft cushion on which to fall, placed behind you.

Pushing your foot forward against the ground (indicated by the lower green arrow) would result in your hips and torso being thrust backward (indicated by the green arrow at the hips) and you would fall off balance. The reason this does not happen when you perform Barbell Squats (i.e., fully activate quadriceps contraction) is because you are coordinating a straight upward trajectory, directly opposite the vertical pull of gravity.

It’s also worth noting that—when you do this exercise—you can feel your feet sliding forward toward the front part of your shoes, which reflects the forward thrust of the tibia (i.e., the emphasis on “knee extension”, thus more quadriceps activation). This does not occur with standard Barbell Squats.

Another way of ascertaining the degree to which each participating muscle is loaded (quadriceps for knee extension – or – gluteus for hip extension) is to measure the “moment arm” of each limb / lever.

The reason why these lines are drawn vertically, is because that is the direction of the resistance during Barbell Squats. The “moment arm” lines of Cable Squats would NOT be drawn vertically. Cable Squat analysis would require that the “moment arm” lines be drawn diagonally, parallel with that direction of resistance (the cable). Thus, those lines would show a greater moment arm for the tibia, instead of the femur.

Further still, in the image below, notice the distance that must be traveled by the head and hips, in order to go from the descended position to the standing position. It’s a considerable distance. Thus, the question that must be asked is, “which limb/lever (and therefore which muscle) is producing most of that distance traveled?”.

Which of these two limb angle changes is more likely to produce the degree of torso lift shown in the previous image?  Obviously, it’s the image on the left image: the femur—gluteus—hip extension that produces the majority of the upward rise of the torso.

In the image below-left, you can see what occurs during standard Parallel Bar Dips. The direction of resistance (“ground reaction force”) is straight upward, which therefore requires that you produce a straight downward direction of force. That direction of force is mostly parallel to the forearm, which renders it mostly “neutral”—loading the triceps with only about 11% of the force. Conversely, that downward direction of force is mostly perpendicular with the humerus (upper arm bone), which causes the front deltoids to be the most loaded. Notice the degree of movement the humerus must travel (90 degrees)—from starting position to ending position—in order to cause the torso to rise.

The image above-right, you can see what would happen if you were to intentionally emphasize triceps extension, during Parallel Bar Dips. The arrow pointing left shows the direction your hand / forearm would “push” (i.e., think “Triceps Kickback”). This backward push of your hands/forearms (a force that is perpendicular to your forearm) would result in your torso being thrust forward–not upward. You can try this in your chair, with your hands on the arm rests, and you’ll feel the difference in triceps activation and in the way your hands feel on the “bars”.

In fact, during Parallel Bar Dips, there is no “backward push” being produced by the hands, as occurs during typical Triceps Extensions. There is no sliding sensation on the hand, which would result from posterior “friction force” against the bars—as occurs in all effective triceps exercises (i.e., think Cable Pushdowns with a rope, or Dumbbell Skull Crushers with a hammer grip…the way you must squeeze the handle or else your hand will slide). “For every action there is an equal and opposite reaction”…thus, there would absolutely be a significant “backward slide/push” occurring—against the bar, by your hand—if the triceps activation (during Dips) is as great as some people think it is. Yet, there is none of that during Parallel Bar Dips.

Below is yet another example of how the direction of force produced by the person, determines the degree to which a participating muscle is loaded.

The image below—Sissy Squat on a Sissy Squat Bench—shows a direction of force that is somewhat similar to the Swiss Ball Squat above, but to a much greater degree. In this case, the body would fall backward if not for the brace in front of the ankle (similar to the friction force of the feet on the floor, above). Thus, the direction of the resistance is NOT vertical—it is now rotational—moving around the pivot that is created by the pad at the top posterior side of the tibia (just below the back of the knee). In fact, you can see that his feet are not even touching the foot pad under them, proving there is zero downward (vertical) force in this example…until he reaches the fully ascended position.

The example above also highlights one more very important thing that is worth noting. As you can see, in this descended position, the hip joint is bent (“flexed”). So, when this person rises to the upright position, it will APPEAR as though the hip joint was actively extended by way of the gluteus muscle—but that is NOT the case, in this exercise. Rather, the hip is being passively extended.

To understand this, imagine the man above has no torso. The knees would extend (straighten) by way of quadriceps contraction, and—as a result—the femurs would rotate up to the vertical position. Anything that is placed at the upper end of those femurs—let’s say you’ve taped a golf ball on the upper end of each femur—would also rise. Now, just replace the golf balls with his torso. The same thing would happen—the torso would simply rise by virtue of the upper ends of the femurs rising. In other words, the torso is just “going for a ride”, carried upward by the rising end of the femurs. The hip extension muscles (the glutes, etc.) do not need to actively produce that angle change at the hip joint, given the physics of this exercise. Of course, the weight of the torso would load the quadriceps (knee extension) much more than the golf balls did, but that is a separate issue.

To further illustrate this, look at the two images below—showing a Supine Dumbbell Press.

The insertion of the pectorals is on the upper end of the humerus. When the pectorals contract, they pull the upper arm from an outward (lateral) position, medially—toward the midline of the body. Now, imagine that you have had both of your forearms amputated. So, you attach a weight directly to the distal end of your humerus, and you perform this exercise–“shoulder adduction” (i.e., which is the function of the pectorals). You would still effectively load your pectoral muscles, even if you have no forearms or hands.

Like the previous example (Sissy Squat bench), if you were to then place a forearm (with a hand and a weight) at the distal end of each humerus, that forearm (with attached weight) would also be carried upward by the rising end of the humerus. Thus, the elbow goes from bent to straight, passively—without assistance from the biceps or the triceps—as long as that forearm stays in the vertical position…balanced over the elbow. This is because (in this case), a “vertical” forearm is the same angle as the direction of resistance, so the forearm is neutral—requiring no force from the biceps or triceps.

Again, this proves that a joint is often passively moved (flexed or extended), even though it may appear that the joint is being moved by the biceps or the triceps, or whichever muscle which “could” actively flex or extend that joint under different circumstances.

Below is a final example of this. You might think that—during any rowing exercise—the elbow is bending by virtue of biceps contraction, but that is not necessarily the case.

Imagine that you have no forearm, no biceps and no triceps. Instead, you’ve attached a rope to the distal end of your humerus, with a weight hanging on the bottom end of the rope. You would still be able to perform the above exercise (One Arm Dumbbell Row) simply by contracting the muscles that move the shoulder joint (i.e., the “back” muscles), thereby raising the humerus from the lower starting position, to the ending upper position.

The rope (with the attached weight) would do the exact same thing the forearm is doing in these photos—hanging from the elbow, going along for the ride, rising simply because it is being pulled upward by the distal end of the humerus.

Some people mistakenly believe that rowing exercises function as a biceps exercise, under the misguided belief that “since the elbow is bending, it must be like when we do Curls”. No—it’s not like Curls at all.  When we do Curls, we cause the forearm to become perpendicular with gravity (i.e., horizontal). Conversely, when we row, the forearm stays mostly parallel with gravity—in the neutral position.

2 thoughts on ““The Direction of Force” in Exercise Analysis”